By : Tomsche69
Another week, another few models finished. Being a hectic week, not quite as many as I`d liked to have done, but included is the first of a new `wave` of models I bought all over the place, namely characters from non GW sources like the mage you`ll see a bit below by Reaper models, or the limited to 299 pieces Wood Elf general on Great eagle that CMON launched a few weeks ago. I received that model this week, and must say it is truly gigantic and awe inspiring!

I always liked the Amber lore, and used to take rather 2 low level wizards instead of a higher one. My personal favourites back then where The Flock of Doom (medium to power, and the 3d6 S2 was great to annoy one of my regular opponents, who fielded Orcs and Goblins) and most of all, Awakening of the Woods. A great spell to harass war machines with it`s 2d6 S4 originating from any wood, and after a while my opponents even hoped to roll to get the table side chosing in order to put the side with the most woods on my side, and as such not to lose small units early on. Whoch I liked, as that only enlarged my mass archery with yet more missiles flying towards the uncomming hitter units :-D

Now, what I never believed in was the Dispel caddy sorcerers, as I saw that as 50 to 100 points wasted if you compare the amount of damage the average spell can do (and that is, passing dispel attempts), so I rather invested those points in a few more War Dancers or some tricky yet not always usefull enchanted items for the wizzies. 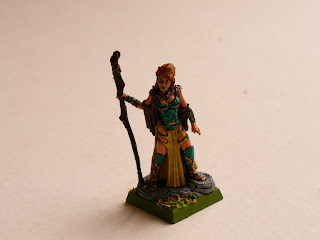 Though the current rulebook doesn`t allow level 1 or 2 Asrai mages to select spells from the lore of Life or Amber, in honour of the old days I painted the prophetess up in a mixture of those two colours, one never knows when the next edition of the Wood Elf Army book arrives...

The other models I paited up are two more archers for the first of many Glade Guard units, with a couple dozens of them more lying around to get painted. 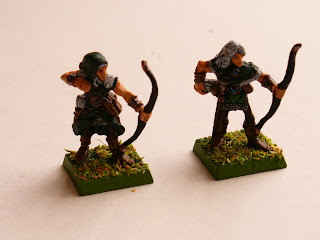 Up painting alley right now are the first of a unit of Waywatchers and another `new` buy, to test the colourscheme, a Dryad. Not the, I must admit, pretty plastic ones of the current range, but the blocky metal ones of the past... just to keep the antiquated look in the force. After those, it`ll be the first target to finish the War Dancer unit with a new character for the cahampion, an Enigma Miniatures model. Cool figure, sexy figure, it`ll be a joy to paint her up... and if time permitting, of course some more Glade Guards.

Remember those archers from last weeks picture, the pre-repainted ones? Well, they got reworked for this weeks instalment... 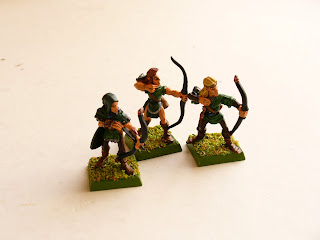 As the unit very slowly starts to take form, I also painted the unit champion to go with these fellows. 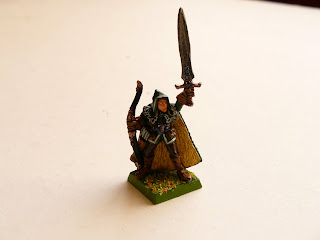 Now when I read through various forums about the new edition of Warhammer, it is almost unanomiously stated that the Wood Elves are the hardest hit by the new edition and the major changes in rank denials and skirmishing rules. The guerilla style warfare like favoured by a Forest Spirit host and the likes are very hard to pull off. Which I do not care about, as I used to field my armies with huge blocks of archers (lines of 15 / 20 models wide, nicknamed the thin green line) supported by two big size hunks of War Dancers and a Treeman to hold up anything that came to close. And as WFB seems to be moving back in time in it`s rules with the return of things like percentages (hell, only thing missing from my days are power cards for magic hehe) my force selection suddenly isn`t antiquated at all anymore.

Being a good week, I even managed to paint an extra couple of War Dancers. 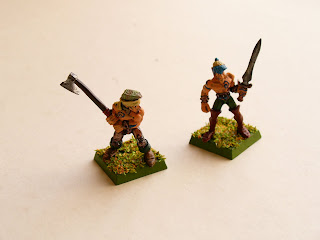 Up the pipeline for the comming week are a couple more War Dancers and Archers, and then slowly starting some other units. For example, repainting a Scout unit using the really old Sea Elves models.
Read More
2 Comments
Tag : fantasy, warhammer, WFB, wood elves,


For the first time since 4th edition, I bought the Warhammer rulebook. At 60 euros for a 500+ hardcover full colour monstrosity, this is a great value for money buy in wargame rules land. And as an added (BIG) bonus, if you have an annoying, ruleslawyering opponent or bystander, one smack with the book should be knocking those out stonecold for several hours.
On a sidenote, according to the fine weight scale at work she weighs a hefty 2 kilos and 205 grams...

More and more lately I`ve been pondering returning to the Warhammer game, after a break of many years. This came due to the highly competitive sort of gaming the tournament scene seemed to indulge into casual games, as everyone (including myself)kept searching for the unstoppable killer combo.
Since then, I tried playing various other games for more of a storyline gaming style, but to shame had to find out that most people just don`t care for that, they want to haul the victory at all costs by mixing and maxing rules and lists in such a way that they almost shatter beyond repair. I can give a heap of examples, but ain`t gonna do that for now, they`ll make great quotes at the bar instead, just to say it ain`t worth my paint time in those things anymore.
Guess it`s a bit of human nature, and perfectly normal, so heck, I might better start returning to GW then, at least there you KNOW that the game is build to be competitive.

But, enough for a rant of a wargamer, on with...

I recently (aka, last week) discovered a piece of pure nostalgia in my garage. My very first Warhammer army (hell, I must`ve been around 14 - 15 years old when I bought those figures), namely Wood Elves.
From an era where their army list was 2 pages long, included things like Skarloc and the Beastmasters with their pet animals, and War Dancers could lock combats indefinitly (even with Nagash if needed back then) these blokes looked... well... downright terrible.

Years of neglect in a moist garage, suffering through 3 house moves in a shabby cardboard box didn`t do the paintjob any good. That is, if the colour splatching on them can even be called a paintjob, `undercoat` and `varnishing` where big unknown terms back then in a pre-internet era.

Over the comming weeks and months, I`m going to be restoring them to `today game` standards, being a slow painter (I paint units on 2 models a time basis...) and having to conclude several other projects, my aim to have about a 1000 points restored is around the New Year, to have the whole 5000 points redone... who knows.

As an apetizer, the first three models I reworked, along some of how they came out of the box... 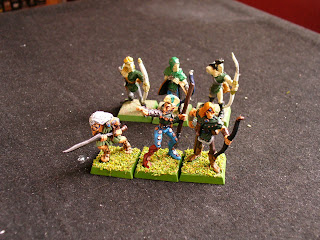 All along the (ruined) watchtowers

By : Tomsche69
After a bit of a hobby `impasse` due to the hot weather, I finally got round to do some painting the last week.

In order to build some more `cd scenery` for 6 / 10mm gaming, I build a small set of watchtowers surrounding a waterpit. Now this remnant of a building actually exists, as I saw it pass by in the Tour the France this year (though the second round tower wasn`t ruined and one of the square ones was, but I had only these ones lying around) 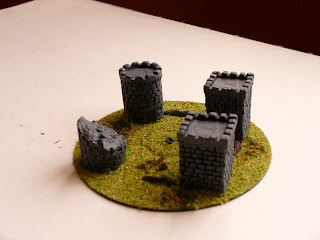 On a totaly different note, I also painted a small landed `transport shuttle` to litter the battlefield in Seeds of War. The model is one of the front claws of the Star Wars collectible miniature game`s Huge Crab Droid, with some trimming and cutting and then given a paintjob.

Deadsimple, but it looks kinda cool in my opinion... and definitly does the job. 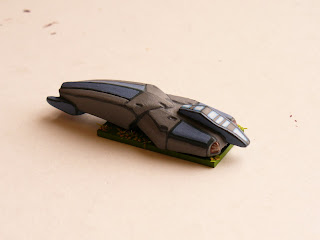