Phase One: The Invasion Begins

By : Tomsche69
And so the time arrives that the TSA 6mm scifi campaign officially kicks of. Humanity`s Gravest Hour, a year long campaign using Future War Commander rules, will see it`s first ground battles the week after Crisis (that being the 12th of november then), starting out with intro games of 1.000 points a side in order to allow everyon to get the hang of the rules.


Weekly campaign oversight, which is updated like, yup, weekly

I hope and asked all participants to gather two forces minimum, namely their `main faction` army and a small, just in case, force of the opposing faction to avoid ending up on evenings with all humans or all aliens.

And here are the two forces I`ll be playing the campaign with, as alien force (which should had become my main, but I fear we`re a bit low on human players so I`ll probably end up playing more on their side) I chose the Cybernetic Species X31 (or Tau for short): 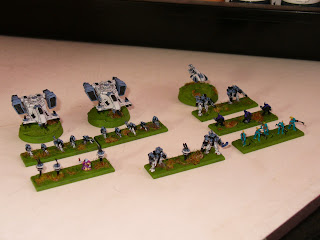 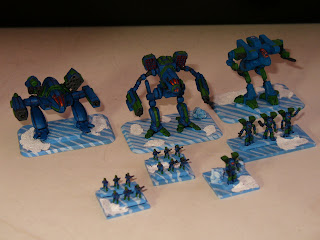 By : Tomsche69
So I managed to paint one each of the units for my army, namely a fire warrior, a drone and one of the Parakeetmen in order to have a template for my Tau force 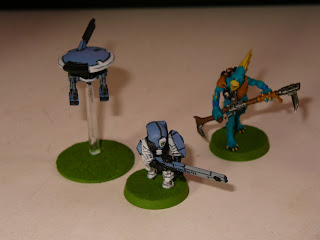 By : Tomsche69
Well, not everything of my hobbies includes wargames, it also includes anime, and especcially Saint Seiya. When the Myth cloths range got released, I`m donating a monthly part of my paycheck to the models, and this year Bandai came out with a limited to 528 copies each set of the Athena Exclamation, one with the Gold saints (Mu, Aiola and Milo) and one with the three Fallen (Saga, Shura and Camus). For the full backstory on this, I refer you to the Chapter Sanctuary of the Hades part of the anime, but I got my statues now, respectively 302 / 528 and 448 / 528.

All in all they knocked me back around 400 euros including shipping and customs costs, but they are for me worth each and every eurocent and make a great centerpiece in my figures cabinet. 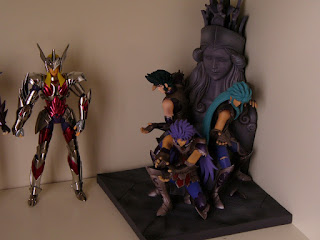 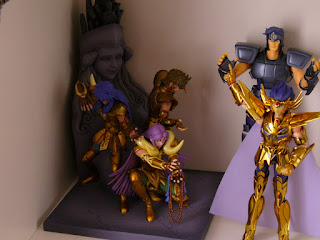 By : Tomsche69
"Hey what, it ain`t new year yet!" I hear you think, and your right of course, but I tend to calculate my `wargame years` from november to november, with our clubs own wargame show, Crisis. 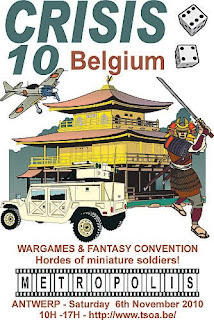 This usually is the event where new ideas are spawned (and many burried afterwards, but that`s wargamers for you), and plans are made together with heaps of shopping lists for the comming wargame year.

So what am I planning to do the next year then?

Good question, i`m going to try (enter hysterical audience laughter) to finish projects for once instead of starting new ones all the time.

First of all, there`s the hopefully one year going to run 6mm scifi campaign I rambled about earlier, and plan to finish an army completely for both sides, namely the Tau and the Battletech Clans.

Then there is that 10mm irish army, where I `only` need to paint 2 units of 3 chariots still for to make them battle ready... something I have to do for like 3 months now *shame on me* and paint the remaining few units to flesh the whole force out.

Third in the pipeline is to build a 1500 points Tau force for 40k (though knowing myself, it`ll end up way bigger) and this is also my `target material` for the comming Crisis.

So that`s the top 3 of things to do, but there is more what I have to ponder on and more importantly, work on...

* Project Asrai... it ain`t finished, far from it even! Many more bowmen await alongside wizards and all kinds of forest dwellers to get a new paint job. And I should be looking out for 3 to 6 Treekin on eBay or second hand markets for a bargain on those.

* Finally commence painting on a 6mm GHQ Italian army for Blitzkrieg commander. They are still lying here for almost two years now, and not even opened so far...

* Redo the 15mm Flames of war Compagni Carri I still have. About 2000 points, and those new `what if` P40`s might fing their way into the force as well... at Crisis of course hehehe

* And we keep staying in the italian side of things (hey, this is the societa after all hehe) with some 28mm extra troops like LMG`s for use in Pulp games and the likes.

* 1/7000 Starfleet to slowly replace the models I have in larger scales.

* Continue work on the 28mm Army of the Clones

Seems like a busy calendar already, and no doubt a lot will be added to it as the next game year processes, might be time to trade away a couple of stillborn projects and impulse buys before the next load comes in... and that give away model from the comming Crisis might inspire a Buck Rider orientated thing as well... 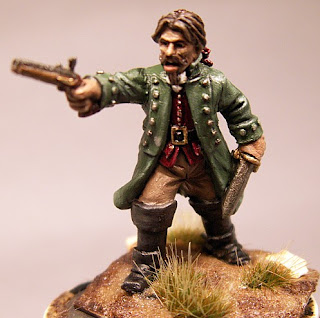 By : Tomsche69
Tested out transferring the epic scale scheme to a full sized battlesuit, and this is the result of how the future Tau army will look like: 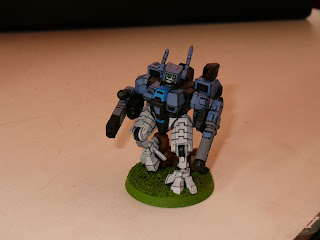 Somewhere in the comming week I`ll be trying to get this on epic scale suits as well, and I`m quite curious how that is going to turn out on the small guys
Read More
0 Comments
Tag : 40k, Tau, warhammer 40k,

By : Tomsche69
Last week I traded away a heap of models of 28mm Doctor Who with a clubmate for a large amount of Epic Tau.

Now, I`ve always been a fan of them since they came out due to their `japanime` look, so I jumped at the deal in order to field `Cybernetic Species X31` in the Future War Commander section of my campaign. 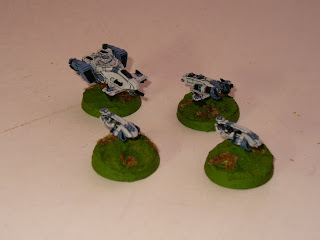 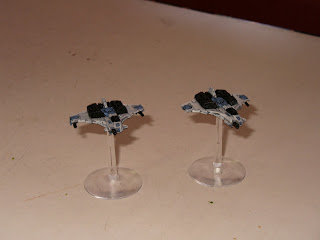 By : Tomsche69
So the campaign has begun, and armies gather. One of my `humanity` armies will be build from Battletech (Ral Partha) models Clan list, the Diamond Sharks.

Well, it`s a general name for the Clan lists for FWC, but I like the colourscheme and the backstory from the old 3050 series (the name changes, the fact they `weren`t ready` and the fact they invented the Mad Cat II) 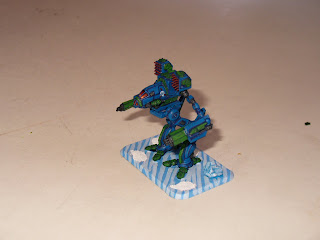 In game, I like the concept of their commanders being `upgrades` for the mechs, though the fact that they then use the skirmish variant command units does make them a lot more vunerable opposed to the regular lists, but heck, it is only a game after all and a campaign a story!
Read More
2 Comments
Tag : 6mm, battletech, future war commander, FWC,

By : Tomsche69
With the start of our mega campaign, Humanity`s Gravest Hour, now less then 48 hours away, I`m presenting the maps at the start of the campaing.

The space map will be for Full Thrust, starting with 250 points `first probes` games this friday in the Hemisphere regions (the northern and southern barriered areas), then gently cruising up in points till after Crisis when the campaign officially starts it`s run.

Full reporting on the campaign can be followed on 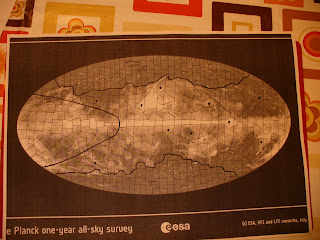 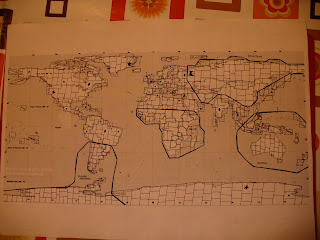 By : Tomsche69
And so this project concludes, restoring a battleworthy 2000 points tournament force out of a heap of old figures I found back. It ain`t everything that I have that got painted, but this is enough to get me `back into a game` occasionally.

So I needed 10 scouts for the force, and found these little gems amongst the collection. Hailing from around 1990, the Sea Elves are now part of my Asrai host to sneak up on the enemy lines and shaft them early on. 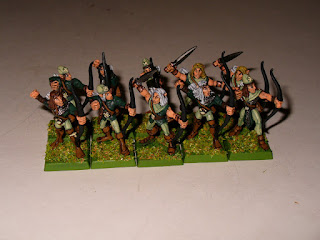 Of course, no `true` classic Sylvanesti host would be complete without one of the old Marauder treemen. A strong hingepin to anchor the lines of archers on, I always loved these guys even before they received a train of special rules. 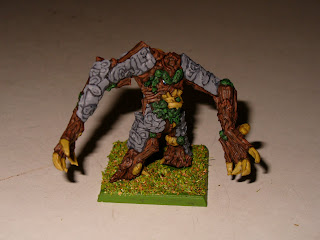 The final unit for the force is a second, small unit of War Dancers, of the `next generation` compared to the other unit. Led by the old Warhammer Quest character as a Bladesinger, they will mainly have the job to be stop gaps where the thin green line seems to bend. 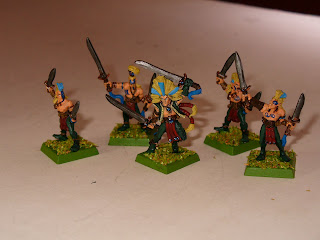 And so the force is completed with this group shot. Normally Iwill be playing a tournament next week (with like, 1 battle of 1000 points under the belt) but I still haven`t received confirmation, so it might be that that won`t pass. No worries on my part there, then the next time this force comes out of the closet will be with the War of the Beard 2011 tournament at the local club. 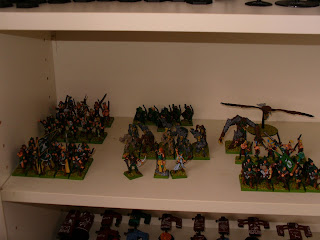 Well, going to spend most of the time working on the Humanity`s Darkest Hour campaign, and as such will be finishing my host of 6mm armies and the final ships of my OUDF fleet for Full Thrust fleet first. After that? Who knows, I certainly don`t hehehehe...

So thanks for following my ramblings for two months, and till the next time!
Read More
2 Comments
Tag : fantasy, warhammer, WFB, wood elves, 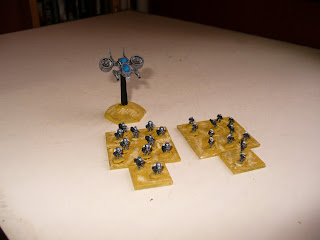 So as I scribbled down earlier, a huge 6mm Full Thrust / FutureWar Commander campaign is about to take of in our local game club, TSA.

In order to build up some forces, and before that, when I scoured the net for alternate models for Seeds of War, I stumbled upon this nice Greek company.

I immediatly was attrackted to the Progenitor models, and more specifically the Shadowasp and the Wolfsbite... and so I made an order for some of the models from the range.

Now, most of the tanks come with a choice of turrets, and i opted for the `infantry support weapon` turrets, as these make the tank look like an evolution of current tanks yet clearly showing off it`s `future` status.

Shipping was impressive... 3 days from Hellas to Belgica! Great service and very cheap shipping cost, combined with the low prices makes that I payed around 20 euros all in.

So opening up of the parcel, and being so impressed with the quality, I painted them up before posting them here.

There was one disappointment for me personally, and this is not at all criticism to the sculptor. The Wolfsbite doesn`t `do it` for me in the flesh (metal). While the Shadowasp is all wawwie like I imagined it to be, being like a hybrid child of a russian Hind helicopter and the flyers from Avatar, the trike just seems a tad to big for the rest of the vehicles in the range. But as I said, this is purely a personal taste, as it IS a very nice sculpt and lovely detailed.

A very pleasant suprise on the other hand for me where the Gecko APC`s. Didn`t had high exptancy of them, in my mind`s eye seeing them as `yet another sort of Rhino` (as in, game use, not the model itself), these little fellas really have grown on me. Great sculpts like the rest of the range, and a pleasure to paint up!

So my personal conclusion: this stuff rocks, and I higly recommend the 6mm scifi gamer to give them a go! 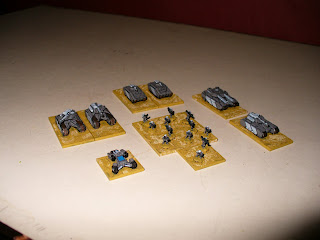