Yes, not a week between entries, as I went in a `painting tantrum` this weekend. I`ll sleep sometime later... and managed to complete the initial 1000 points of troops!

First of where some more Waywatchers and Dryads to make the units battle ready (though not completed) and a Great Eagle to harass those war machines in the back of the enemy lines. 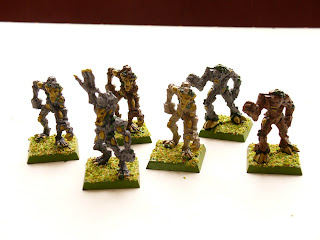 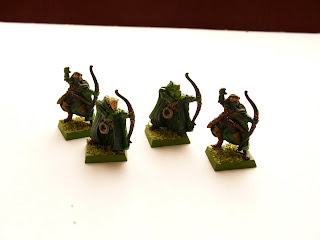 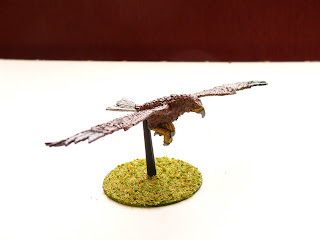 This model has a special place in my heart. Being the very first Wood Elf I EVER painted, he started out as a character in AD&D 2nd edition ages ago, called Loraliel Silverleaf. Now that name has stuck with various characters and games, including a bank alt in World of Warcraft, a (human) Ranger in Guild Wars, led my Wood Elves in ages past, and currently for example running around in Runes of Magic. Back then, he toted the two only unique Wood Elf magic items, the Hail of Doom Arrow and the Bow of Loren, the latter we even had to share with the High Elves. As such, it seemed only fitting he lead the army in the `reboot` I`m creating, and will hoist the Bow of Loren and Hail of Doom Arrow around once more 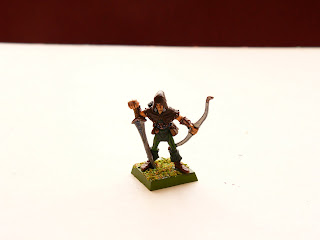 And so we arrive at the first army list `new style`, in order to give the 8th edition a go. I have NO CLUE at all wether it`s going to be effective, but that`s not something I`m gonna worrying about for the comming months. I paint what I like and I`ll see how to incorporate them into a fighting force...

First of is the general, Loraliel, who is a Lord choice Highborn with the aforementioned Bow of Loren and Hail of Doom Arrow. He will join the unit of Glade Guards to bring them to 16 deployed in two ranks and able to fire 19 shots a turn.

Magical support comes through Veekilya, a level 2 spellsinger without gizmo`s.

Core of the force is as normal a unit of Glade Guards, with full command and 15 men strong. Supporting them is the 10 man War dancer troupe, which with the right dance can hoist out on the charge 31 strength 4 attacks... not bad for a small heap of elves.

On the other flank there will be a unit of 8 Dryads, for a further heap of strength 4 attacks, and anchoring the line with the benefits of being Forest Spirits.

Finally are the harrassing units, a small unit of 5 Waywatchers and a Great Eagle, to, well, be a general annoyance really and to be on the look out for any opportunities (war machines, mages, etc etc) at the enemy backlines. 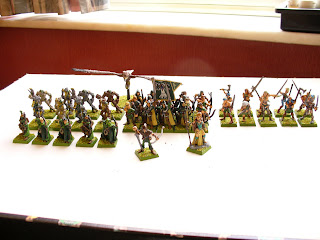 So that tournament I talked about yesterday... I`m gonna give it a serious shot to complete the required forces. The army above would be expanded on the existing units and characters with some magical gizmo`s, unit champions and some more troops in the small units.
Furthermore there will be a second, small unit of Glade Guards, a second small unit of War Dancers (did I say I love War Dancers), a Treeman and a Scout unit made up of models from around the time I was born...