Two and a half weeks to go for the London GP, which will be my official debut on the whole GP circuit.  I plan to play at least two this year (London and Antwerp) and for the London one, whose format is Sealed Gatecrash, I'm going with limited ambitions. 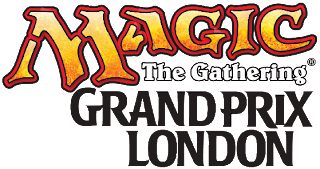 The plan is to score those final points to be eligible to play the World Magic Cup Qualifiers, whose 'entry level' is 300 Yearly Planeswalker Points here in Belgium, something I need about 40 still this year.  With the regular FNMs and everything, this should be do-able to get anyways before the 17th of March, but safe then sorry and the likes.

Technically, that would mean entering alone is sufficient, but I'm planning on at least giving it a shot as every win would grant me 24 points (3 points with a x8 multiplier) but as the format is Sealed and your dependant on the pool you'd be pulling, I've been watching the side event calendar as well.

I'm going to register on the friday, but as I will be playing normally only during saturday, lacking all skills to actually make it to day 2 all things going normal, I have been watching the available pick up events, and two are at the moment intresting for me... IF I can rebuild my standard deck on time.

Both are the Constructed format and register from 15.00 until 20.00 on saturday (or until full if that comes first), and are the Standard format one and the Legacy one.  I'll be hauling both decks at least along.  THE benefit of Magic vs Miniatures, less hauling ;-)
Can't see me pack and haul two extra wargame armies 'just in case' hehehe.

Further preparation wise I'll be playing the comming FNM Gatecrash draft, drafting not to win but to try and get at least 2-3 potential cards for my Standard decks in the making, being the retuned RDW and the Orzhov / Cypher deck I'm building, together with both Release events this saturday and sunday.  Next week it'll be booster openings from the on the way booster box and card sorting (and reading!) so I should be armed well enough to at least not make a weird mistake.