The latest instalment of the Myth of Hades has arrived on my doorstep last week, and it is a bit of a two-legged reading. 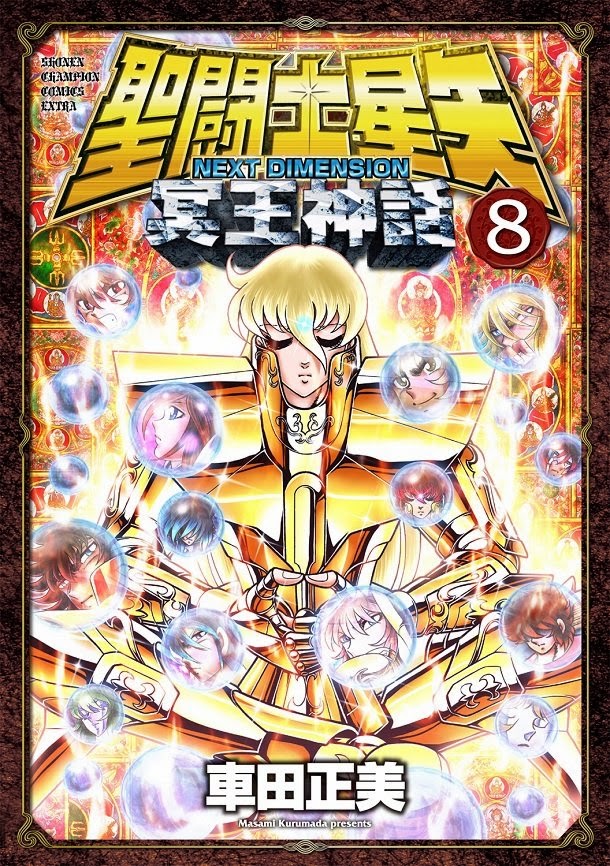 It isn`t thick on the action in this volume, but yet it lays on an additional layer on the various story lines that have been interwoven in this time travelling adventure so far.

First off, there is the confrontation between Virgo Shijima`s astral presence (as his physical body is still in the Labyrinth of the Gods, protecting the baby Athena) and Shun and Tenma.  They are saved by the appearance of the astral presence of Virgo Shaka, contained within Shun`s Andromeda cloth, and revealing to the 18th century incarnation that Shun will be the next Virgo saint.  Both bronzes are then teleported to the Twin Salas where they find and pick up Sukiyo`s silver cloth of the Cup.

Sukiyo in the meantime faces off and is defeated by Dohko.  In the preview for issue 9 it is revealed he has died, and that Griffon Vermeer will take his place, but considering the healing powers of his silver armour I don`t believe we have seen the last of him yet.

The mystery about the 13th gold cloth, Ophiuchus, gets intenser as it is hinted at that everyone in the 18th century knows who he actually is and that he is present among them, so it will either be the Grand Pope, or Sukiyo I guess.  Shaina however is possessed by it`s evil cosmo briefly in the current day and attacks Marin.

We also learn that Dohko has led Shiryu pass to go and help protect Athena, who is now evolved into an age of about 6 years old, and defeats Cardinale switfly with her immense cosmo.

The only oddity, is that there is no news about Hyoga, who has also travelled to the past, and that no Aquarius saint has been revealed yet... could it be?  Thinking of it, how cool might it actually be if he now is the gold Aquarius saint, they would meet up with the 18th century Cygnus saint (Camus perhaps?), Hyoga teaches Camus the Absolute Zero technique... now THAT would be an awesome storyline loop in the series.  This is also pure speculation on my part though, but who knows...

All in all, an intresting volume for the `back story`, but like some filler episodes in anime series, the progress of the overall story isn`t to much in this book.