Posted by : Tomsche69 woensdag 4 augustus 2021
Time for the next "lunch time anime" at work, where I try to watch at least 1 episode during lunchbreak. 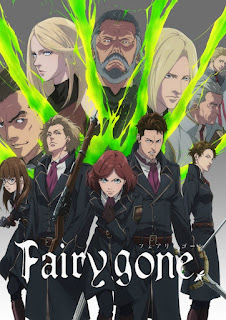 So I purposely don`t pick series longer then about 12 episodes, as in busy periods, I at times don`t come round to it.
And now it is time for the second season of Fairy Gone.  I think the first might not have been a classic, but it was an enjoyable series, so I figured this the perfect continuation.  The series involves the human world in the era around world war 1, but some of them have fairy powers as they are bonded with the mythical creatures.  The second season starts where the first stopped, with an assault on the castle.  During this battle, we learn more about Marlya through flashbacks, as well as her connection to Veronica. 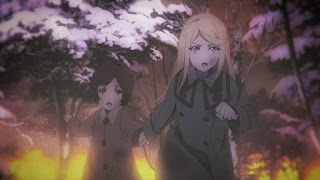 When they start the hunt for the Black Fairy Tome, the Gui Calrin maffia becomes involved and gets the book in their possession.  During the efforts of the Dorothea team to shut down the various sects, they also learn that Wolfram apparently betrayed the Arcame and now works on his own.  As a man descendant of the creator of the Black Fairy Tome approaches them, it all seems to get a lot more serious!
The Dorothea team manages to defeat the last leader of Gui Calrin and their genetically cultivated Fairy Soldiers, recovering the tome.  But upon transportation to their headquarters, Wolfram ambushes the convoy and steals the book.  The Dorothea members also learn that Marlya, being Suna born, is fairy possessed instead of having an artificial fairy organ planted in.  This results in her fairy being able to remove the fairy powers of the artificial ones and set the fairies bound to them free. 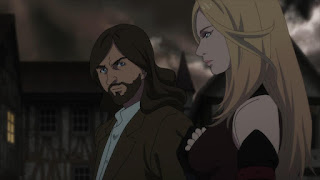 It turns out however that all the events have been nothing but an elaborate ruse by an organisation called the Eins Order, whose sole purpose is to summon the Divine Beast.  They need a fairy possessed for that purpose, and capture Marlya.  Free intervenes and they escape, just as the prime minister is assassinated.  Ray Dawn is appointed the acting PM, and they await for Veronica to show up as Ray explains why he burned the fairy forest of Suna back in the days... 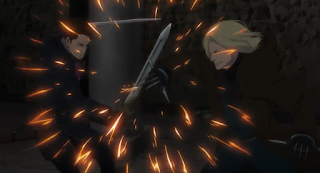 Licar reappears as the Order attacks Dorothea headquarters after an ambush on Ray Dawn's convoy.  As Marlya tries to reconcile him and Veronica, Griff attacks and he is wounded and taken away after he protects the girls.  Griff harvests his fairy possessed organ, the Divine Beast is set loose on the world, while Free faces of against Griff, but as he becomes overpowered by the crazed zealot he gains unsuspected help from Wolfram.
As Marlya tries to stop the Divine Beast, Veronica pays the ultimate price to allow her to do so as their fairies can combine into their one true and pure form.
Now, the series isn`t that fantastic, but it isn`t as bad as many make it out to be either in my opinion.  Just an average series which will be mostly remembered by me by it's awesome opening theme, but the thin character developments (heck, half the good nor bad guys are barely anything more then a name, and Free really deserved more) is lacking.
Nevertheless, I don`t regret watching it, so that's sort of a good thing.
Share This