Posted by : Tomsche69 donderdag 5 augustus 2021
So I bought this manga, unknowing what it was. 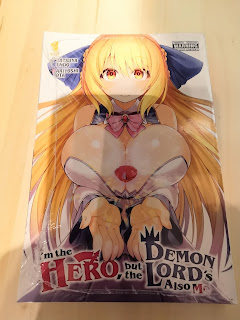 Now, it was wrapped in plastic, and I just thought it was because the store, Akiba here in Antwerp, had received them like that.
Nope, it is because it is one big boob show!
Not that I mind, mind you gnahgnah...
The story seems to start like any other isekai, with Yuuma about to be ran over by a speeding truck.  he even thinks he will be reincarnated in another world... and miraculously escapes death, staying just where he is. 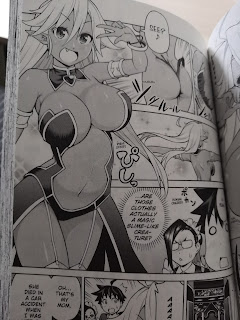 One day he is cleaning, when all of a sudden a scantily clad lady, princess Alfin, appears.  She claims he is a legendary gero (who, actually, turned out was his father) and he needs to save her kingdom again.  But then another gorgeous lady, the demon Lavinia, appears, claiming he is the demon lord instead (which was actually his mom)!  As it turned out, his parents decided to elope, because his father fell in love, and couldn`t resist her chest area!  And now both the women claim Yuuma as their own, with all awkwardness included!
As he first gets kidnapped by Kokene, a cat girl demon general that wants to be impregnated by him, he has to make Lavinia reach her power to use the Foreplay Flash to overcome her.  he learns his father lost both his and mother's magical swords though, so they have to find out where they are...
So yeah, it was one ecchi bubs-show volume, but heck, it was also hilarious as hell, so I`m definintly getting the other three volumes in the series!
Share This