Posted by : Tomsche69 dinsdag 3 augustus 2021
Recently, I obtained volume one of this excellent anime series' manga version, and so I dived in to re-read the story I loved to watch. 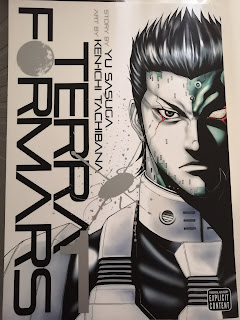 And sssht, but Michelle K. Davis is waifu material. 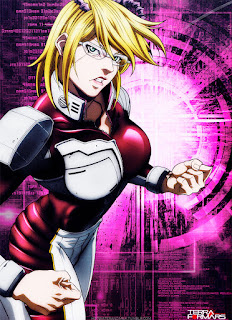 In the 22nd century, Earth is reaching critical limits for overpopulation.  Centuries ago, the terraforming of Mars was begun, by sending cockroaches and moss into Mars's atmosphere to start the greenhouse effect.
But the first mission to check on the progress was lost, and BUGS2, a crew of 15 people who have had experimental surgery to give them powers of insects, has been send to investigate and eradicate.  However, soon after arrival, they learn the cockroaches evolved in large humanoids with incredible strength, and they quickly are attacked.  When fleeing after they loose some of their crew, they find the BUGS1 spaceship and learn they are nothing more then a disposable experiment.
So this volume basically details one of the side-OVA's of the anime series, and how it all actually started.  The drawing style is nice and clear, and the rather gruesome deaths of some of the characters is also pretty graphic. 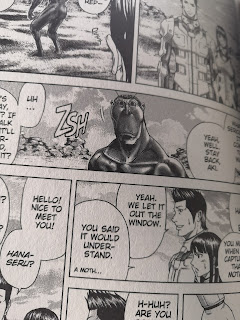 I`m definitly looking forward to read more, especially see if the series goes onwards after the anime ended!
Share This