Posted by : Tomsche69 dinsdag 22 juni 2021
So the second part of season 3, and hopefully a bit more to my liking then the first half. 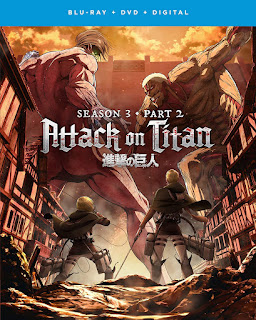 At least the intro was more bombastic again...
The second part of the third season is all about answers, and what is in the basement of Eren's old parental home.  As the 104th Scout Regiment sets out, they find the Armoured and the Colossal Titan in wait for them as they plug the hole in the wall.  This is all part of an elaborate ambush designed by "warlord Zeke"or the Beast Titan. 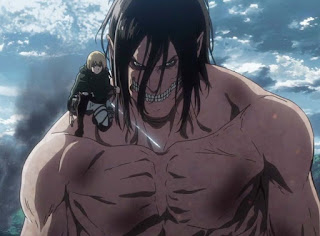 In the ensuing battle, the scouts are decimated and Erwin decides on an all or nothing charge including a rousing speech (though nowhere near Theoden's level of speeching mind you).  The cavalry is massacred, but this was all a rouse as for the first time we get to see Levi unleashed.  My god, what a fight with the Beast Titan, as we get to see at last why he is called the most dangerous warrior of humanity. 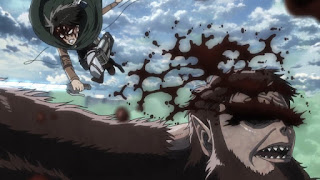 After overcoming the titans at a great cost, and Levi being forced to choose whose life to save between Erwin and Armin, and choosing the latter, they advance to the basement.
In it, they find old diaries of Eren's father, and the truth of the titan attacks.  It turns out there is life behind the wall, as the current population are descendants of the first titan's, hence how they can transform.  They learn that the outside world banished them there for this, and now that they need resources are planning to come for them.  The titan's are created as such to kill the population amongst themselves, and Eren's father tried to rally the population with the Power of the King to stand up to it.
We get to see the history of Grisha as a result, and how he became like that, and learn that Zeke is actually his son, and Eren's half brother as such, who betrayed his father and the other insurgents, leading to the banishment of Grisha to Paradise Island.
But Wall Maria is reclaimed 6 years after the attack of the Colossal Titan, and the scouts for the first time set eyes on the sea... as well as on the docks where it all started, realising the real enemy lies beyond the horizon... 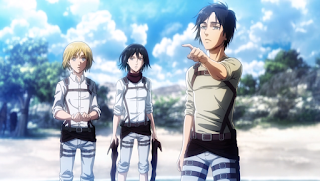 A far better and action packed seasonal part then the first one, and the revelations where shocking at points, recommended for sure!
In another note, you can get some cool merch from AoT here, and it comes 10% off if you use that link!
Also, we learn the series should actually be called "The Attack Titan" instead...
Share This