Posted by : Tomsche69 woensdag 15 september 2021
Okay, for once I ain't to late to the party, and started watching this highly popular series with Noshi shortly after it's full release on streaming. 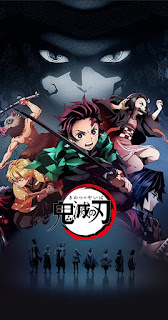 And we had high expectations, seeing how it is represented in fan media, and it's MAL score.
It all begins when Tanjiro, living with his family on the mountainside, goes to the village to earn money selling charcoal.  But when he returns a day later, he finds his entire family massacred by demons except his younger sister Nezuko.  Her blood having been mingled with the demon's, she has become possessed, and Tanjiro swears to find a cure for her, and avenge his family.
A meeting with Gyuu sets him on the course to become a member of the Demon Slayer Corps, to gain the necessary skills to face the dark creatures. 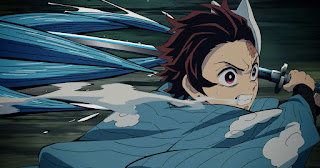 After a long and arduous training, in which he slices a boulder thanks to the ghostly after images of two dead children, he faces the Final Selection trial with success.  Shortly after, he is dispatched on his first mission, to investigate the disappearance of various young girls, and hopefully making progress in finding the "first demon" Kibutsuji, responsible for turning his sister.  But he discovers they are all scared to speak his name.
On his next mission to Tokyo, he runs inot Muzan Kibutsuji, the first demon.  Failing to get to him, he meets Tamayo and her servant, but as they discuss a potential remedy for Nezuko, they are attacked by assassins send by Muzan.  However, in facing off to them, both he and his sister gain more and more power as they learn to use and control their skills better. 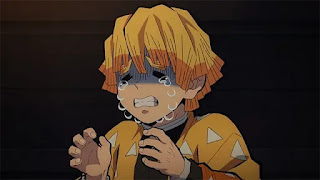 On the road to their next mission, a demon infested house, he meets and teams up with Zenitsu, a cowardly and frightened slayer with an immense hidden power, and Inosuke who fights like an enraged berserker.  After overcoming this trial, they are bested however when they arrive in a forest infested by a spider demon family headed by one of the Twelve Kizuki.  They are truly bested, even when Tanjiro and Nezuko tap into their inner powers through their family bond, and it requires the intervention of Gyuu and Shinobi, to top rank slayers, to quell the treat. 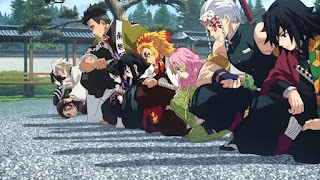 Tanjiro and Nezuko are put on trial for disobeying Corps rules, but thanks to the Master's interference and Nezuko refusing to attack for human blood, an excpetion is made for them and they are allowed to fight together.  Together with Zenitsu and Inosuke they are put under the care of Shinobi to recover from their injuries.
After their recovery, they set out to hunt for the Lower Twelve again and find a cure for Nezuko...
A real fun series, mixing action and comedy perfectly together, and with a great art style.  I love how they animated Tanjiro's water based attack effects, and it rightfully is a highly rated series.  Now to sit down and watch the movie...
Share This