Posted by : Tomsche69 maandag 27 september 2021
There it finally is, my long anticipated base set to give MechaTop a run! 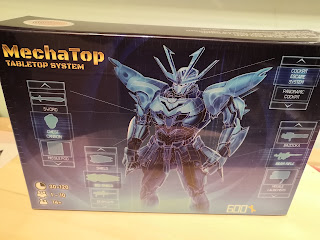 And inside the swiftly shipped cardboard box, the nice compact box was joined by a publicity folder, and a button with the logo of the project. 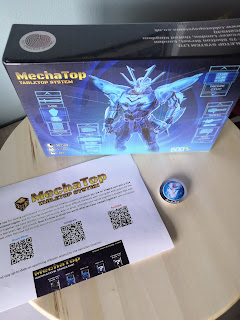 So let's crack open the shrinkwrap, and see what is inside this box! 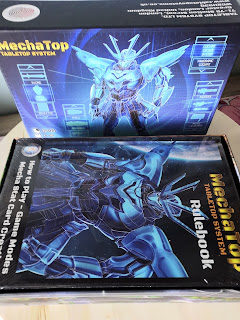 The first thing you see of course is the handy pocket sized, hardcover pocket rulebook, the rules whom I already put a post on last year, as as a backer I received the PDF versions as well.  It might be there are some modifications to it, but I guess nothing to spectacular.  It's printed on sturdy paper, and littered with artwork and toy model displays while having a good, clear lettertype. 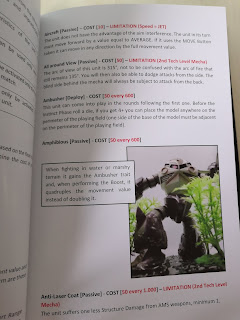 The box itself is nicely compartmentalized, allowing you to put everything in there nice and orderly. 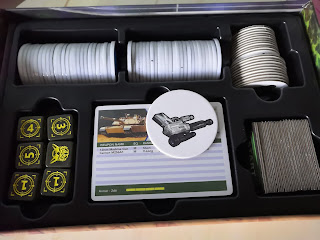 So starting from the top left and going clockwise, let's have a look at all that's included. 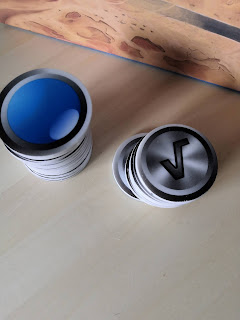 We start with two trays of "cockpit buttons" whom are basically the way to operate your mecha with in the game.  Every button contains the action the mecha will undetake, and they are printed on a stiff plastic like a poker chip.  They also look nice and scratchproof, so the art and letters won't be damaged due to gameplay. 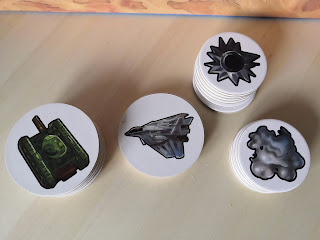 Next we have some cardboard tokens, nothing spectacular but usefull as they are for battlefield effects, as well as for generic units like planes or tanks, so nothing "specific universe related" war material. 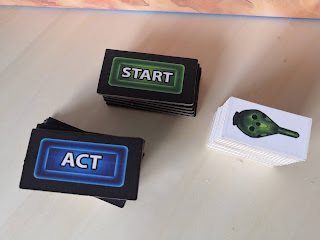 The rectangular cardboard tokens are for the Act / Pass / Start orders, while the tat smaller ones are for Funnels and the likes. 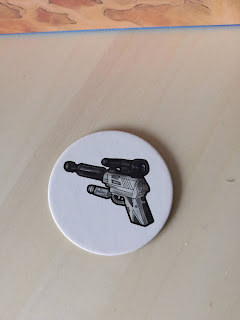 And if you want to field a certain Decepticon leader, there is also a token included to represent him in his pistol form! 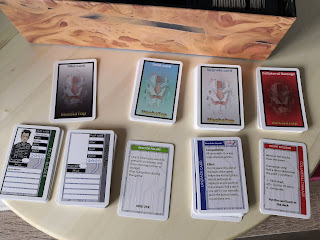 Two stacks of cards are included in the box as well, the smaller ones being the Pilot cards (blank's as well as some premade), Twists cards (kind off a battkefield joker gamble), Upgrade Cards (for all those extra systems on your mech) and Collateral damage (when you draw these, you're really in trouble). 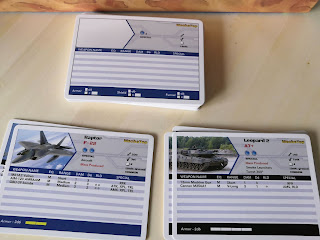 The larger card deck contains the blank cards for your own units (mind you, the game has a database license containing hundreds of premade mecha cards!) as well as those generic tanks and jetfighters. 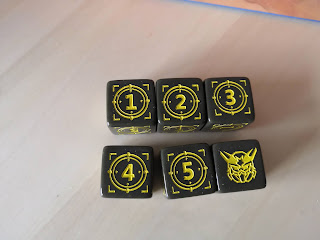 And finally, the box contains some custom dice, with two sets of crosshaired numbers and a mecha head on the "6" side of the dice.
There you have it, a quick look through of all the components of the base set of Mecha Top.  Now to print out those solo cards, order the DLC campaign sets from their website amd get that Ender working at last to print more bases for my 1/400 scale mobile suits.  The only thing then left is to corrupt my buddies for some good mecha action!
Oh, and the button?  He went on one of my pinboards! 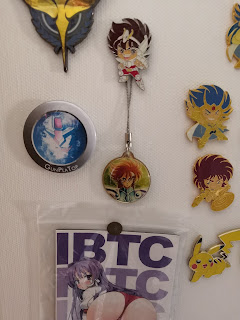