Posted by : Tomsche69 vrijdag 24 september 2021
One can wonder sometimes what the heck they make anime's about... or one can just watch the abundance of fanservice. 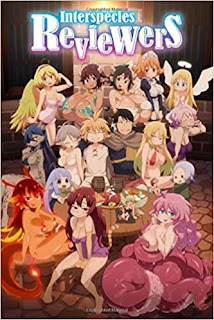 And that is the case with this ecchi fantasy comedy, as it is all about... reviewing brothels from a variety of species!
And it all starts out with what sounds like a japanese cover of YMCA... I kid you not!
Stunk and Zel are two perverts who made this their life mission, and are soon joined by an injured angel, Crimvael, who can`t return to heaven before her halo is repaired.  And she gets defiled within the hour of meeting them, loosing his purity to a cat girl. But the investigations turn out to be the most popular and earning reports on the hero bulletin board. 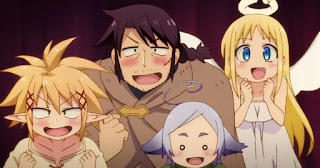 They are approached by the spokesperson (the Piccolo reference loool) of Death Abyss, a demonic political party candidate that wants to get a bit more popular in the public view, to make an honest review of demonic succu-girls.  But not before they experience the joy of a gender swap!
They continue exploring "the frisky life" with various species in the world (the golem episode is plain hilarious!), while we learn Stunk is actually a very legendary warrior as well, who fell out with his father but doesn`t look back on his past. 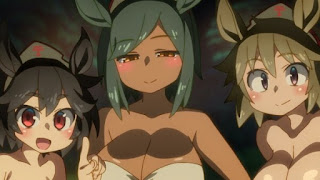 The series is also riddled with awesomely hilarious inside jokes, like a guy that managed to remain a virgin until 30 turning into a wizard, or some references to isekai anime, so it is truly worth the watch.  It's just one of those series you think the creators must have had a blast at team meetings while making this...
Be warned though, weirdness reaches new levels with the egg episode!
Share This