Posted by : Tomsche69 donderdag 16 september 2021
Picking up at the exact moment the first season of Demon Slayer ended, this movie was a huge success in the land of the Rising Sun. 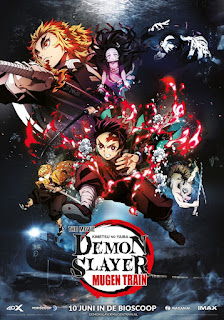 And like the My Hero Academia movies, it is signified by "upped" animation levels.
The story starts as such when our four young heroes board the train with Flame Hashari Rengoku, set out to investigate the disappearance of people on the trainline.  They soon encounter two low level demons, but it turns out one of the lower Twelve is actually on the train.  More over, he is fused with the train and puts them all to sleep.  During these sleeps he tries to destroy their spirit cores, only to find out their deepest desires and will is stronger then anticipated as they break out of his spellcraft. 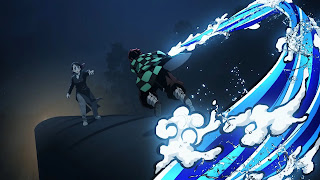 Tanjiro and Inosuke manage to overcome him by working together, and defeat the Lower Twelve while saving everyone on the train, but an Upper level demon makes his appearance.  With a power level far above they have ever seen, Rengoku steps in and fights him.  While the battle ultimately ends in Rengoku making the ultimate sacrifice, the demon escapes right before the sun rises, to the great pain of our young heroes. 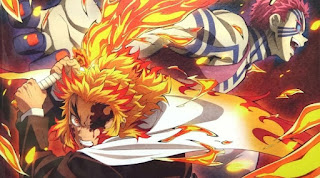 A truly epic and fun movie, this seems to be the perfect set-up for the second season coming in next year, and I must say both me and Noshi are awaiting it, we truly enjoyed this anime.
Share This