Posted by : Tomsche69 dinsdag 21 september 2021
Okay, so I really liked the Rise of the Shield Hero anime, and there is a companion series, centered around Spear Hero Motoyasu Kitamura. 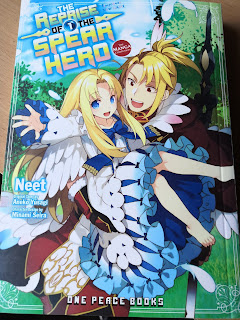 While in the anime he was the gullible wannabe saviour of the world that got played my Myne (or should that be, Bitch).
Now, he finds himself back at the day he was summoned after he got killed in the first time around, but he has retained all his powers and knowledge.  It's a fresh start of the "game" in God Mode!   He is determined to get things right this time round though, but even while details seem to change, the general lines can`t be changed.
He keeps seeing women as pigs, due to them betraying him before and leading to his original death, he takes on the once again falsely framed Naofumi under his wing.  He gets his own filiolal chick, a black one he names Kuro. 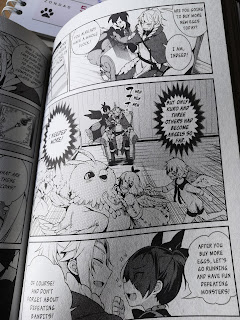 Naofumi goes to Siltvelt to train... and suddenly all is reset, Motoyasu having lost all companions.  He learns that a skill on his spear resets everything back to the day of summoning should one of the heroes be killed.  teaming up with a companion named Eclair, he will bring Naofumi to Siltvelt himself this time round!
A joy to read, though it quite odd to see a friendly Shield hero pass by.  The Spear hero is his overreacting self from the anime though, and the "in between" pages are hilarious... definitly a series I`ll try to complete in the near future.
Share This