Well, no matter what I rant or bitch about on this little corner of mine in the webwide world, I`m a clubman by heart.
So when of our clubmembers suggested at first, then concretisised the plan to run a small scale Warhammer tournament the comming 12th of february, I jumped on board and pledged to join in. An army of 2000 points of Chaos Dwarfs would take the field...

... and then I realised that as usual, I didn`t think about the practical side of things. My forces are in shambles, less then a dozen has been restaurated to battleworthy status with the rest in various stages of stripping, cleaning, greenstuffing and more of the likes.

Of course, being sidetracked in the meantime with things like Brushslave where I converted a `Dawi Zharr Present Delivery Service` for didn`t help either, so now I`m faced with the task of painting 46 models in about 25 days... a ratio I barely manage, so it`ll be a tough one. 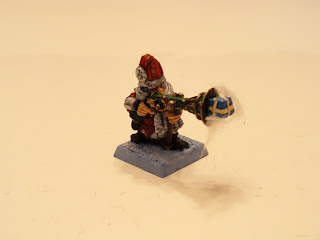 For such, I drew up an army list `placeholder`, a list to focus on completing before I *moght* have time to add the extra bit and bob to make it actually more playable and definitly more into `my style` of gaming. I`ll take large blunderbuss blocks anytime over wizards for one, but need breaks law for now.

The resutling list, which is seen below, is drawn from the Legion of Azgorh list. There wehere ideas to play with the Indy GT, but I personally refused this, we FINALLY have an official list now, so they better well start get used to it. Okay, technically we have two, the Ravening Hordes list is still official as well, but that`s a detail and I never could repaint as much models as my all conquering relic of days gone by in a month time...

The `List for Now` tallies up to 1965 points at current, as I still have some playspace that way for some items and stuff, and is focussed on one large Blob of Doom, in order to set up a painting factory row for the old and venerable plastic warriors.

Hero - 180 pts
Deamonsmith level 2 with Dispel Scroll and The Terrifying Mask of Eee! wielding the Lore of Metal

As you can see, not to much soup or great ideas in that one, but like I said, it`ll have to do the job of being `manageable to get painted` for starting again.

And if I keep nagging by best matey Centurion, to get his Beastmen (yep, the ones from the Retunr of the Relics batrep ages ago) aslo battleworthy so we can duke it out in classic style with the Next Generation...