So Grandfather Nurgle visited me, and now I`m stuck with a nasty cough and some slimey stuff exiting the nose, making it a bitch to bend forward to paint... so painting works are suspended for a few days crap Crap CRAP.

This does however leave me with the time to read up on certain things, do some picture taking to have entries prepared for the blog the comming weeks, and generally do other kinds of sideboard stuff, so without further ado I`m handing over the microphone to two collegues of mine who like to have a word here on the Society`s podium... 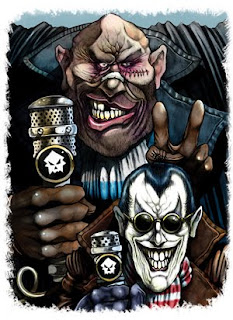 Jim: Hello Bob, and welcome for joining me. It sure is a special day today isn`t it.

Bob: Certainly is Jim, for we are about to witness a very special event. After more then a decade, we`re about to see the return to the pitch of the Vongalazthag Violators.

Jim: Indeed! Less then a month away from the kick off for the TSA Cup, these mean, not so lean killing machines are back. Their look has received a complete makeover, trading in their big chimney like stormram hats for compacter, heavier plated armour, but they look the business if you ask me. 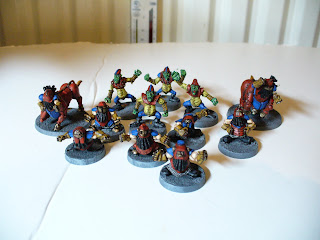 Bob: They sure do. Today, they are only showing us glimpses though of their new set up. The coaching staff, led by a new coach called Vah`Durr, is still in the nearby village of Hoevenenburg for what they said where only `administrative details`. I guess they are negotiating building rights for a stadium there, as I saw long lines of peasants being marched of in the direction of the Badlands.

Jim: Honestly Bob, I doubt they would ever leave the Magma Bowl stadium, remember the fireworks show when they ignited the whole visitor stand on the tones of `Hashut is the Champion?`

Bob: Ow yeah huhuhu. Anyways, here we go it seems, first up are the stalwart lineholders of the team. It is rumoured they have two objectives for this cup, to score the single most amount of red cards ever seen, and to break the knees of everything that is called a catcher... you know, those fancy pancy lightfooted ballerina`s. 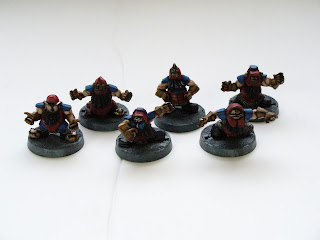 Jim: Next up are the two mighty Bull centaurs of the team. Should they actually want to ever score a goal, it seems these guys are the ones to do it. Though I wouldn`t be amazed these berserked monsters would just thunder down towards stragglers in the opponents half of the field like throwers. 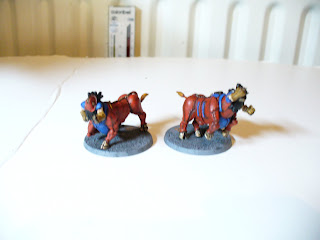 Bob: And finally the brunt of the team, Hobgoblin linemen... I guess someone has to receive the punches... 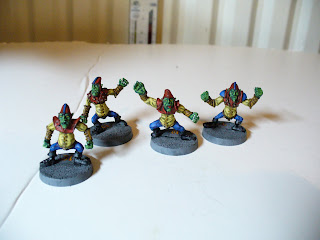 Jim: So that seems to be the starting line up, we`ll be back to you fans as soon as more is known about the team, the staff and any friendlies they should play before the actual start of the TSA Cup. Take care!
Share This