The Lure of Warhammer

I guess you can say I`m back `into` it. After a brake of more then a decade, slowly my defenses crumbled and more and more I was lured back to the world of the Games Workshop hobby.
Over the past weeks I listened, I read and I watched at the Tin Soldiers of Antwerp. I enlisted for a FUN tournament and a Blood Bowl league. And the truth is stunning, yet no suprise.

It`s like this in cold hard facts: since the release of 8th edition and the Project Asrai that was featured on this blog, I have been slowly and steadily been gearing back to war for Warhammer. Initially also for Warhammer 40.000, but I find that, just like all those years ago, I`m still more of a ranked up troops person then a big tank person.

That means I will be painting up regiments more then squads in the comming months.

Another factor is that, and the others can say what they want, the Far Side Iniatitive has ran it`s course. There is no longer a need for the old Warhammer players of our group, who back then `had it` with GW games. This was mostly a result of a very bad club-tournament result, where things happened beyond imagination.

Things like an army, even though only 3/4ths finished (for example, non of the interiors of the vehicles where painted, even though it was displayed with hatches open) being nominated as Best Painted Army just beacuse `the bloke always bring a completely fresh army to a tournament`.

That tournament was ran by official Outriders...

So we got the Far Side, offering an alternative to the back then very popular GW games at TSA, to play something else with a low `step in cost` and not sitting twiddling thumbs all friday evenings.

But now, so many years down the road, those veterans like Patrick from Nelson`s Revenge, or my archnemesis Guy, myself, and some that had disappeared from the radar for a few years are `ready` to start playing Warhammer again. It showed in the campaigns the last two years, as more and more motivation drifted from one thing to another, people where searching what to do... so we tied back the knots to the game we all got to know each other with, Warhammer Fatasy Battles.

Now though, it is grabbing me back in her seductive clutches... I`m actually planning on (slowly) restarting all my old armies and then some.

So let`s take a trip through memory lane.

The Chaos Dwarves always have been and always will be, my number one army. It is even now still the only force I plan to restore to it`s former 15000+ points size. I just love those little blighters for the look and concept, always havem always will.

But they actually weren`t the very first Warhammer models I ever bought... that `honour` belongs to... The Empire.
The very first WFB models I bought (heck, as if I knew what they did, they had the boxes in the local store back then and they looked cool, and at least they had a book) where Karl Franz on his griffon Deathclaw, the box of 4 Knights of the White Wolf and their grandmaster, an Amethyst wizard on foot and a mortar. That tiny, little mortar of the early 90s. 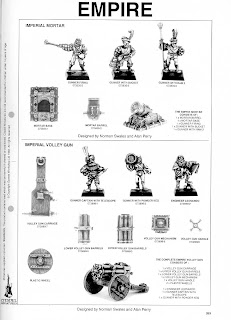 In all honesty, I liked playing the Empire, with their little cute Steam Tank(ette), their knightly orders and their excuse to mix and match uniforms of different states together. And they had a Halfling Hot Pot!

Another army I fielded even on tournaments where the Wood Elves, most of those can be read about in the old Project Asrai and Battle of the Relics posts in my archives on this blog.
However, the way Skirmishers now work in Warhammer doesn`t make me enjoy them, the neatly ranked waywatchers or dryads just look silly in my opinion...

Or as I can be seen here fighting next to my nemesis as long ago as in 2002 at the trial edition of our clubs tournament package for back then... 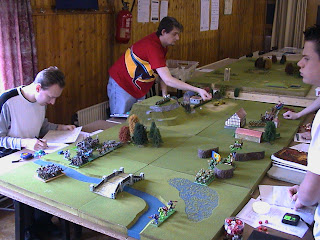 But there was another army I often fielded, as the picture from a big battle in 2001 belows shows... The Vampire Counts. 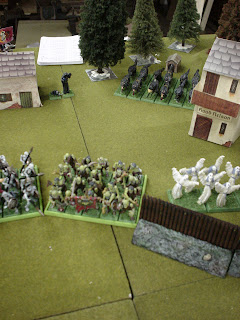 Ever since the Undead, a force I was building at the time, in the Vampire Counts and later the Tomb Kings, I had two forces from one. But even with all the cool bloodlines, I played the one true family, the Von Carsteins. I just liked the old Vlad and Isabella models... and that newly released Coven thing is just drop dead gorgeous... 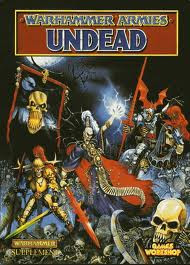 So I have decided to rebuild initially small forces of the Empire and both Undead forces. Initially for this year I`m only aiming of completing at least 1000 points, good enough for the small skirmish game left or right without the large blobs of doom already comming into play, and to keep focussing on the main paintjob of the year, my Chaos Dwarfs.

But one thing I also have learned in all those years, are alternative models. With all my dabbling in various historical periods and cluttering of models for said periods, I have enough models to actually field 1000 points forces at least for the Tribes of Norsca and the Cathay unofficial yet professionally made army lists, as can be found here on the Reporter and as these armies are `accepted` for play over at TSA, why the heck wouldn`t I build them up...

Things like Mantic and their battlaion boxes are handy as well, it`s not like I`m ever gonna enter a Grand Tournament or such anyways with anything else then my Chaos Dwarfs... that is, IF I ever would enter one of those anyways. i`ll get my tournament fix (not counting small local affairs to promote the Word of Hashut) from Magic: The Gathering.

So that makes that apart from the Chaos Dwarfs, this year I am going to build up no less then the basis of 5 more Warhammer armies: The Empire, Vanpire Counts, Tomb Kings, Cathay and Tribes of Norsca, each for a 1000 points and then I`ll see where to go from there.