So, it`s that time again that a new Magic the Gathering set is upon us. Yesterday, sunday, I went to the second day of the pre-release to battle it out and score some Planeswalker points on the sideline.

Expectations low as I`m only playing MtG again since past summer, the day started sour. You get to open 3 boosters each of Innistrad and the new set, Dark Ascension, and guess what was in my very first opened Innistrad booster. Yup, Liliana of the Veil damn damn damn as you have to give the parcel to the pool and receive another in place. 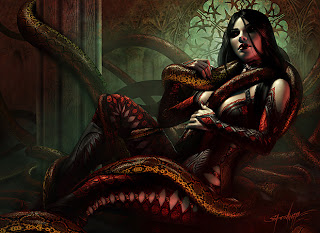 The pool I received wasn`t to write home about, so the best I could build was a green / black deck hoisting 2 Falkenrath Nobles and 2 of the new variant of Llanowar Elf, the Scorned Villager. Basically a mana generating flipping werewolf.

So armed with a big green beasties mostly deck, i had to go to war. Now, I always use minor land, and this time, at only 13, people looked at me strangely with my 7 Forests and 6 Swamps... and yet I only got mana screwed once, in my third round. Apart from those, I did have two of the above mana beasties, AND the new gargoyle that also generates mana, so this wasn`t the cause I lost big time. That was more to blame on the fact that I just don`t have all that much experience in the new style of Magic playing.

By the end of the day, i scored a 2 - 4 record with no drops, though on technical terms my opponent of the 4th round had filled in the result slip wrong, granting me a 2-1 win instead of a 1-2 loss though.

The thing that gives me some confidence though, is even with that crap deck, I wasn`t blown away apart from round 2, where a deck with an Invisible Stalker equipped with whatever bumps and boosts kept hitting me from turn 3 onwards for between 5 to 12 damage... not much to do against an hexproof, unblockable beastie, and a race against time I just couldn`t win as he could gladly sacrifice tokens and critters to block of my big meanies like the Ghoultree.

So I have high hopes that albeit slowly, playing MtG at an `above beer and pretzel level` is slowly comming back, I certainly saw players end up higher just because of their pools (one Liliana and two Sorin`s where around) were, well, playing themselves without any thinking. First two games I lost 2-0, the rest I won at least a round, and my opponents rarely ended above 5 lives, so not to shabby at all for an amateur.


And we got this cool rare promo card foil as well in the end... not much use to an all Blue Constructed like me, but I`ll find some trade use for something somewhere with it... 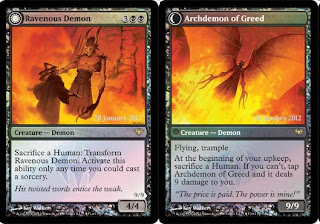