Yes, I know that`s from AC/DC. You tube the song, and enjoy Arnie himself doing the infamous leg hopping in it.
But this is a true blast to memory lane, as this model, long ago sculpted by Alan Perry, was the number one reason I fell in love with, and always remained, the Dawi Zharr.

You see, I haul from an era of Warhammer in which War Machines where mostly labelled as `small` and `cute`, and then this beast came along. The fact it had the `holy shell bearers` crew only reinforced the image for me. I fell in love with this model from the very first time I lay my eyes onto it in a White Dwarf ages ago. 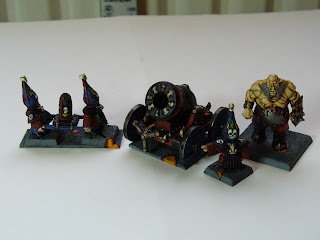 And that was even before I read the rules of the cannon. You see, in my heighdays, when I shuffled from tournament to tournament, I towed along two of these guns in my list. Not for the damage it did, but for the earthshaker by-effect, which gave my infantry otherwise force the chance and more importantly time, to line up those blunderbuss volleys. Getting caught in those days in the crossfire volley of two units of 21 blunderbusses tended to ruin your day, not to mention your battleplan...

So now it is back in the game, under the disguise of the Dreadquake Mortar and optionally mounted on a traincarriage. But as I have an old school army (even though I already have quite a few of the new FW thingies) I am so including my beloved gun in the list. It`s expensive as hell, the quake rules are changed and you need an Ogre loader to fire every turn with success, but it... is... still the Earthshaker.

The Ogre itself is a normal Bull of a terribly painted, 40k bumpers and spiky bits glued onto them lot for nearly naught on eBay. Nothing some detaching and repainting can solve, even though at 6 Bulls, not all my cannons in the Earthshaker Grand Battery (don`t ask...) will get an extra crewmember. Yeah well.

In addition to the gun, I also managed to paint up the level 2 , Lore of Metal wielding Deamonsmith this week. This bloke, dubbed the `carrier of obligatory Dispel Scroll` will linger near the gun. This way, he can benefit from the Look Out! rules with the crews, while the gun can re-roll due to the Infernal Engineer rules. 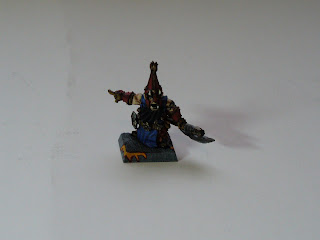 Why I take the Lore of Metal is because I like to use the lesser used magical lores, it adds a dimension to the `standing out of the mass` that you have with the Chaos Dwarfs to start with. Though I admit, if I know I have a battle against someone playing a `flying circus` I`m probably going for the Lore of Fire, as people tend to race towards the big fat cannon with those things.

An Usurper? What is This!

I learned that in the small tournament on the club, someone else will also play the Dawi Zharr. TWO of the noble armies in a 16 man or so event, surely I must throw this little lordling into the fold and crush him under the hallowed boot of Hashut before his political ambitions reach to far.

Or I`ill line up the Earthshaker Grand Battery against him... DODGE THIS MOTHAFUCKA!