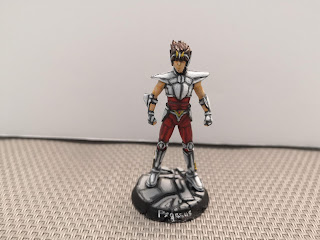 So of course I needed to have a look at them, and as I`m collecting the range, a solo game try-out will be posted tomorrow.
But let's have a look at the ruleset, counting a nice and modest 5 pages, first.  Games are planned to last 10 turns, and both players make up teams using a points value.  Every turn has 2 phases, one in which a player makes his actions, and one where the maintenance of the forces is done.
An action consists in either move and action, or action and move, and as he gains Cosmo energy, his attack pool (ATT) increases.  When attacks are carried out, the result is compared and this gives the damage (if any) caused on a model and if any additional Cosmo can be gained.  Damage itself is divided by lowering statistics, and once the ATT value reaches 0, the model is knocked out of the game.
This is where I think there is an odd thing in the rules.  A character is knocked out at ATT 0, and damage distribution states first armor, the ATT and then Speed are lowered.  So in effect, Speed never drops due to damage as it comes after ATT which takes out a model upon reaching 0.
Cosmo on the other hand can be used to activate a variety of abilities, like re-rolls, pushes and the likes, and each comes with a different cost.
Apart from knocking your opponents models out, there are some variable victory points to be obtained as well, and the player with the highest tally at the end of the 10 turns wins the game.
A fairly nice little ruleset at first glance, allowing for fast, cinematic games using Saint Seiya figures.  I even think this might be something for a club opendoor demo or small show even, and that's something I`ll definitly be looking at in the near future.
Now to give the rules a go, and I`ll upload the battle report of that first try-out tomorrow!
Share This