No Game No Life 9 - Yuu Kamiya

Posted by : Tomsche69 woensdag 28 juli 2021
Oh no, the penultimate novel of my beloved series! 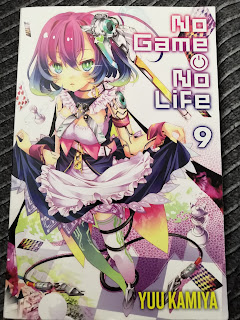 And it all draws closer towards the "grand finale"as Blank wants to challenge Tet, the God of Games.
After defeating the rank 1 race, the Old Deus, Sora and Shiro created the master plan to make Holou into the first pop idol of Disboard.  Because they realise that could compensate for the one thing they lack: charisma!
But then the Ex Machina enter the fray, survivors each of them of the Great War as no new units have been created since then, and wanting to ally with Sora and Shiro... by becoming their butler and housemaids.  Intent on using Sora, who they see as the reincarnation of Riku from the Great Warm to reproduce with them as they only number 13, the siblings are in for a though game.  After gaining access to Sora's adult content, they constantly sexually harass him, driving even Jibrill to despair as they try to flee from the robot beings. 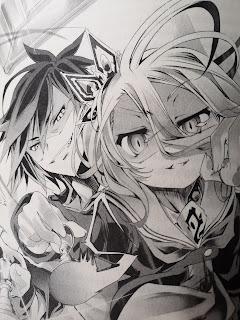 When they figure out a way to break the lock, they challenge the Ex Machina to a chess like rhythm game, in sequence with Holou's Idol concert.  However, they quickly learn they made a critical mistake in their game against Blank: so far, they always ignored the genius sibling Shiro.
They manage to defeat the Ex Machina, and in doing so, we learn what actually happened all the way back in the Great War, and the defeat of Artosh...
Another fun story, and back to a lighter tone then the past volumes where, making some good and relaxed reading.  Now onwards to book number 10!
Share This