Posted by : Tomsche69 vrijdag 30 juli 2021
So me and Noshi are back to the adventures of Rimuru, and his efforts to build and maintain the Jura Tempest Forest kingdom. 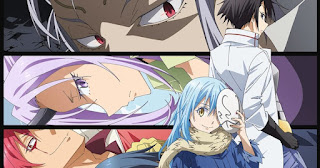 As we loved this comedy / fantasy lighthearted series first season, we sat down to enjoy this season 2 (part 1 actually), numbering 12 episodes.
And it starts with Rimuru receiving a delegation from demon lord Carrion in his kingdom, immediatly leading to some comical, friendly brawling, continuing the tone from before. 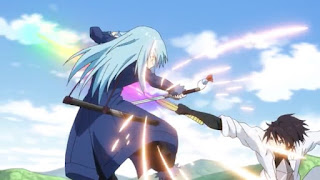 As the commercial trades of Tempest pick up due to the brandy Rimuru decided to make, the Kingdom of Falmuth grows jealous and plans on waging a Holy War on the monsters nation, spearheaded by three Otherworlders.  They erase magical barriers reducing the powers of the monsters, and an attack ensues injuring many, and killing some of the citizens due to the three rules Rimuru had instated early in season 1.   Rimuru himself meets his match in the form of Hinata, former master of Shizui, and barely escapes. 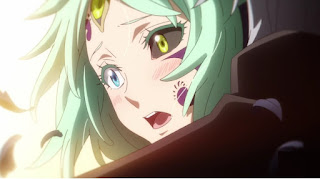 One of the recent visitors, Myulan, reveals she had put up one of the barriers as she is a servant of demon lord Clayman, who seems to be pulling the strings behind the scenes.  And seemingly made Milim declare war against the beast nation of demon lord Carrion.
The Falmuth kingdom attack leaves many in Tempest dead, including Shion.  When learning of a way to ressurect them, Rimuru decides to become a Demon Lord, slaughtering the attackers to reap their souls and ascend.  He ascends to Demon Lord status, reviving the fallen, and gains an ally in Diablo in the process. 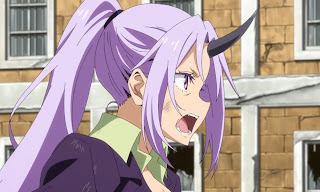 But as Lord Clayman seems to manipulate the other Demon Lords, Milim and Frey, against Lord Carrion, whiping out the Eurazian kingdom and becoming a threat as such versus Jura Tempest.  But as Rimuru restores Veldora at last, he has a serious ally now...
Another fun, albeit a bit darker, season compared to the first one, we can`t wait until we can binge the whole currently airing second part of the series!
Share This