Posted by : Tomsche69 donderdag 15 juli 2021
A recent, 8 episode fantasy series that runs on Netflix, Noshi and me sat down to give this a look. 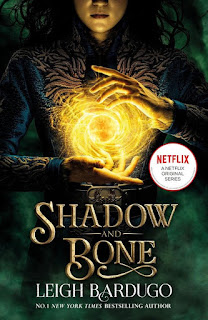 And we liked it.
The series takes place in a russian like fantasy country, where certain members of the population, the Grisha, have powers of magical properties.  But the lands are split by a huge shadow Fold, a place of darkness, which causes the lands to stand on the brink of civil war as the western territory wants independance.
Childhood friends Mal and Alina, drafted into the map makers section of the army, are on a mission inside the fold, when events reveal Alina as the mythical mage, the Sun Summoner,  that can cast the light of the Sun.  This makes her suddenly the most imported, and wanted, person in the land for various reasons. 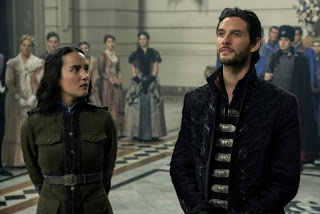 On the other side of the fold, Kaz Brekker is hired to try and capture her, while the general of the army brings her to the Little Palace.  This ancient fortress of the Grisha, when they where still hunted instead of feared as nowadays, serves as a prison / protection for Alina.  In her golden cage, she is thought to unleash her powers by herself, while mal goes out to hunt for a mythical stag, and a chance to visit the palace.
In the meantime, Kaz and his crew make it across the Fold with the help of "the Conductor" and set in motion a plan to break into the Little Palace themselves.  Infiltrating the palace as circus performers, they become instrumental in helping Alina escape as she learns the truth about the general: that he is an eternal, and not a descendant of the Dark Heretic that created the fold, but actually he himself! 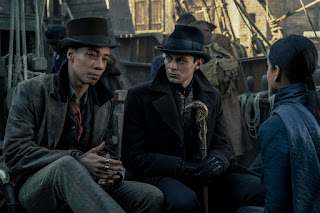 Mal catches on with her, and together they set out to find the mythical stag to enlarge her powers, so she can stand up to the general.  But as they both reach the stag at the same time, Kirigan is victorious and puts her powers under his command... with the help from Kaz and his crew they manage to escape from him, and go into hiding so Alina can learn to control her powers.
Not a bad series at all with some lovely visuals, and we look forward to the second season!
Share This